Implementing rigorous ethical procedures is paramount when conducting research on violence against women (VAW) because of the potential physical and psychological safety risks posed by participating in, and conducting, such sensitive research. Numerous sets of papers and ethical guidelines for VAW research have been published in the past two decades, with gold standard guidelines in the field widely recognised as those published by the World Health Organization (WHO) and International Research Network on VAW. They outline a concrete set of actions and best practices for conducting ethical and safe VAW research, focusing on VAW survey methodologies and intervention research.

While the expansion of ethical guidelines for VAW research has been welcomed by researchers and practitioners worldwide, there will always be a need for these guidelines to be locally adapted in different research settings for a more context-specific and situated approach to research ethics. Scholars have long argued that a “one size fits all” approach is not suitable, even when guidelines are supported by the strongest and most up-to-date evidence. As part of the EVE Project, we have been working alongside communities in Samoa using innovative, participatory methods to co-develop an ethical framework for the project that reflects local realities and that upholds Samoan cultural values. First, a bit of background on the EVE Project:

The EVE Project, Evidence for Violence prevention in the Extreme, is a mixed-methods participatory research project with case studies in Samoa and Amantaní, Peru. We are using participatory action research to co-develop a VAW prevention intervention in these settings in collaboration with community-based researchers and local organisations.

In Samoa, the EVE Project is known locally as “E le Sauā Le Alofa”, which translates in English as “Love Shouldn’t Hurt”. For the past two years, community-based researchers (CBRs) have been participating in a series of workshops and data collection activities, using a Participatory Community-led Intervention Development approach (PCID) to co-develop a locally tailored VAW prevention intervention. With the nature of this research comes the need for a sensitive and situated approach to ethics that reflects, upholds and respects local realities and cultural values. To achieve this, we have been working alongside the EVE team and our local partner organisation, the Samoa Victim Support Group (SVSG), to come up with this Samoan specific ethical framework for the project moving forward. 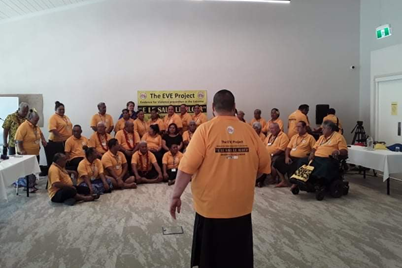 A series of different participatory data collection activities have been used to gather evidence on how communities think the project should run in Samoa. CBRs conducted peer-to-peer interviews in which they asked members of their own communities how they think violence could and should be prevented. They also asked participants to present artefacts relating to their village, which could be objects, myths or songs that reflected their village’s history and traditions, and how they related to the prevention of VAW. Artefacts were later performed/shared during a participatory workshop with the CBRs.

Data from the peer interviews and the presentation of artefacts were collaboratively analysed by the UK research team and SVSG in Samoa via Zoom, and the results of this were then presented back to communities in village meetings led by the CBRs. Community members had the opportunity to discuss and debate these local approaches to VAW prevention and think about important considerations for violence prevention interventions based on the specific processes and governance in their local villages.

In a final participatory workshop, CBRs took part in an activity to reach group consensus on a refined ethical framework for the project. The list of ethical principles, developed from a synthesis of all the activities described above, were written on pieces of card (one per card), and stuck to the wall. Group discussion resulted in CBRs removing principles they no longer felt were relevant, and writing new principles on blank cards that they felt were missing from the original list. CBRs then worked together to organise the principles in an order which made sense to them, moving cards around until everyone was happy with the final list of principles and their order. Rather than ordering the cards from the most to the least important, CBRs organised the principles based on the meaning they held. For example, the ethical principle describing the importance of centring the project around Christian values and working in partnership with the Church was placed in the middle of the list, to reflect that Christianity is at the heart and centre of family and life in Samoa.

The artefacts collected during the activities described above were particularly valuable for the development of a localised ethical framework for the project. Participants presented rich narratives about the history, traditions and landscapes of their villages, describing how these centuries old stories and myths can be used to guide the project to ensure that not only is it safe and ethical, but that it is meaningful for those involved.

For example, one participant presented an artefact about a cleansing pool in their village, telling a story of how this pool was used to cleanse the wounds of an injured child. Each village in Samoa has a meeting place (malae fono) and in this specific village, it was named after the cleansing pool, to symbolise a place where everyone should feel safe when they gather there. The participant described the importance of this safe space for the EVE Project, as the heart of the village and the place where village members can come together to work on making their village a safer place for women. Having safe spaces for discussion in communities was an important component of the ethical framework, enabling communities to work together to build local solutions they could all be proud of.

These stories reflect important aspects of identity and social relations in Samoa, and form the ethical framework for the project.

Over the course of the EVE Project, we will continue to regularly assess this list of ethical principles in collaboration with CBRs. This iterative process of negotiation and adaptation will ensure that any new ideas or issues that emerge throughout the project are reflected in the ethical framework. Further, by using this participatory, iterative approach to co-developing a localised ethical framework for VAW prevention research in Samoa, we aim to centre community identity, history and cultural values and facilitate community ownership of a project that is built upon the self-defined strengths, as well as needs, of local communities.