Engaging the elephant in the room 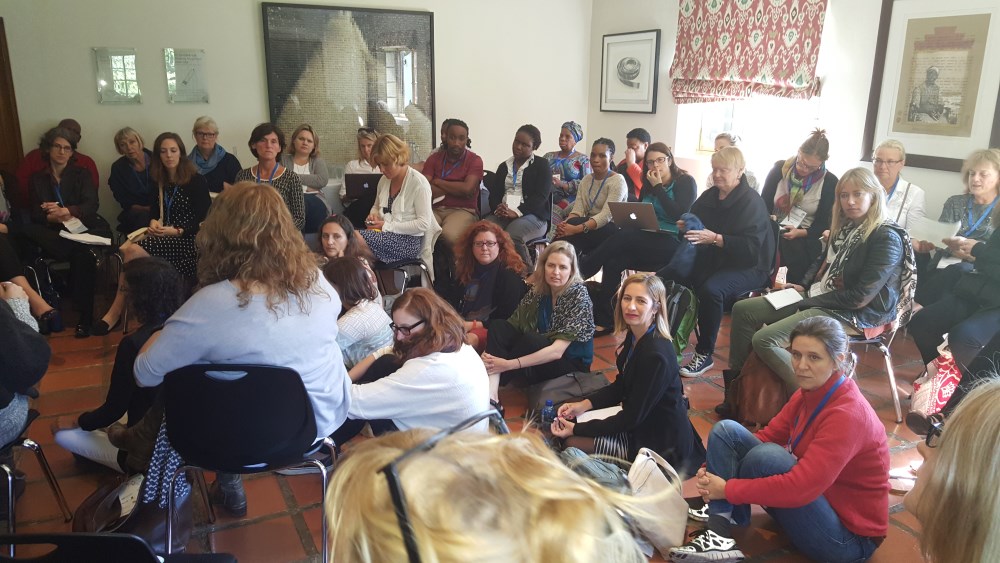 Feedback on the Meeting : “Engaging the Elephant in the Room: Facilitating a feminist way forward for women and men to work together on violence against women”. 17th September, SVRI Forum 2015, Stellenbosch, South Africa.

Many thanks to all of you who took time out of the busy SVRI Forum 2015 programme to discuss issues around programmes engaging men to address violence against women.  The purpose of the event was to move the conversations out of the corridors, address concerns that little time was afforded to debate the issue within the Forum programme and to provide a safe, reflective (but sadly extremely time limited) space to further and facilitate productive conversations on the issue.

In hosting this short meeting, the SVRI does not itself hold a shared vision or stance on this issue and recognises that this conversation was likely to be a discussion involving diverse people who care deeply about and are actively engaged in work on gender equality and the prevention of violence against women.  Further, we note that this is not a new, nor unique conversation and this meeting and meeting summary is not aimed at forging recommendations or build consensus on a topic on which many of us hold varying views, and disparate perspectives.

At the meeting we were asked to share why we attended and air concerns raised throughout the Forum around the burgeoning field of engaging men in violence against women. It seemed clear from the responses that while some people have been engaged in discussions about this topic for several years, others were coming to an open discussion about this for the first time. A few participants came to the discussion specifically to find out what the “elephant” was.

Many issues were raised, and this summary does not claim to capture the depth and breadth of all that was discussed, but rather aims to provide a flavour of the discussion and of the types of issues and concerns raised. In sending this out, we hope to contribute to keeping the discussion alive among those who want to further engage.

Some observations and perceptions that emerged from our brief discussion included:

Further, colleagues from the floor reminded us that we operate and work in a deeply gendered and sexist world, that violence against women by men is rooted in patriarchy, and that we all must continue to strive to unlearn patriarchy and to transform both ourselves, our programmes and our institutions.  We were also encouraged to be patient with each other, to listen to differing points of view and be open to learn from one another.

Colleagues from the MenEngage Alliance pointed out that the Alliance is and can be an important partner for continuing this conversation. They explained that a key priority for the MenEngage Alliance, which was founded with the objective of facilitating dialogue with the historical women’s rights field, is to widely disseminate its accountability principles with the goal of enhancing and defining a pro-feminist operating base among NGOs working with men who call themselves MenEngage members.

This is part of the agenda of increasing the overall evidence base on violence prevention interventions. The meeting provided little time for discussion, or space to unpack observations or issues raised. We would therefore like to ask you to think more about what you want to see emerge from this discussion (if anything), and if or how the SVRI has a role to play.  We ourselves don’t know the answer to this, but some of you did give us suggestions at the session.  SVRIs core mandate is to promote the use of research for improved response and prevention of sexual violence, with a special focus on low and middle income countries.  We will continue to promote research on interventions that attempt to transform masculinities to test their effectiveness. One suggestion on how to take this discussion forward was to create a listserv, starting with the people who attended the session and others who expressed interest, so that the discussion could continue that way. This summary could be a beginning point for such a discussion, and we encourage the use of this email listserv and other avenues available to you to discuss ways of taking this further.  We also ask you to please review who this email has been sent to and forward it to colleagues we may have inadvertently omitted or folk who might also be interested in ‘engaging the elephant’.

We also ask you to consider:

Thank you all again for your attendance and participation in this meeting, and a very big thanks to Amy Bank and James Lang for volunteering their excellent facilitation skills to ensuring this discussion happened – we look forward to more discussion and sharing of ideas to build a shared understanding on how we can work together on engaging men strategies in violence against women work.